Skip to content
We appreciate your patience and continued support! During this time of overwhelming demand, our team  is doing everything possible to produce more bullets and ammo than ever before.
Home/Events/Competitions/2017 45th Annual Firearms Industry Super Shoot
Previous Next

Hello everyone! During the last week in May, I had the opportunity to shoot my first ever Super Shoot along with our Founder and Chief Technical Consultant Walt Berger. I had a great time meeting many fellow shooters and being able to put a lot of faces with so many of the voices that I hear while helping to answer the Berger Tech Line, and I’m thankful for having the opportunity to shoot with you! 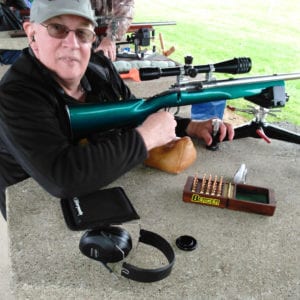 Bob getting ready to shoot a relay.

The Super Shoot is considered by many bench rest shooters to be one of the top bench rest matches in the world. The match is shot at Kelbly’s Range, which is located in North Lawrence, OH. These are the folks that make the Stolle & Atlas actions that many of you use. The usual two gun match comprises of four days of shooting at 100 & 200 yards with both the Light Varmint & Heavy Varmint class rifles, which weigh 10.5 lbs & 13.5 lbs respectively. A great majority of these rifles are chambered for the 6 PPC cartridge. The average of these four days of matches determines the top two gun shooter of this competition.

This year, there were three classes of bench rest rifles being shot. The first part of the match had us shooting the Light Varmint and the Heavy Varmint rifles. The scores from these two classes were combined for the two gun competition. The folks at Kelbly’s also had an optional Unlimited class to see if enough interest can be generated to make it a regular class of competition for future Super Shoot matches.

There were 202 registered shooters, so that meant we had five relays to the firing line to get everyone through as quickly as possible to fire their five groups for each class and yardage. 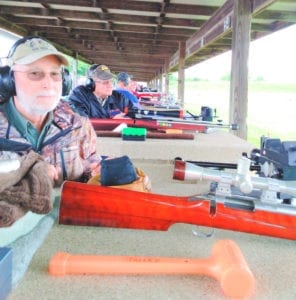 The weather conditions for the first two days had us shooting in sunny but very windy conditions. The third and fourth days were colder and rainy, but we did not have as much wind to contend with. Keeping equipment dry was a challenge for some, but Walt and I had come prepared.

Berger Bullets sponsored the warm-up match at the beginning of each yardage, and we would like to recognize the shooters who shot the small group during those relays:

From all of us at Berger Bullets, we would like to congratulate these winning shooters!

There was a special ceremony at the end of the two gun competition on Thursday to induct Jeff Gaidos into the Benchrest Hall of Fame. Congratulations Jeff!

Lowell Hottenstein of Hottenstein Bullets was also honorarily inducted into the Benchrest Hall of Fame for his lifetime contributions to the sport of Bench Rest Shooting. We are diminished with his passing. He was represented by his wife, who accepted his plaque, surrounded by family and Hall of Fame members present for this honor. 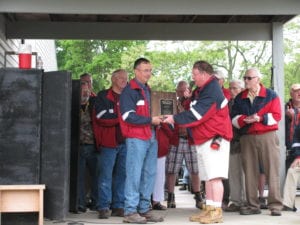 Jack Neary has the honors of presenting Jeff Gaidos with his plaque for becoming a member of the Benchrest Hall of Fame.

This is the information for who won the following yardages:

The Two Gun winner of Super Shoot 2017
Jeff Summers for his two gun winning Agg. of 0.2158” which is a new two gun Super Shoot record!

Congratulations from all of us at Berger Bullets to Jeff Summers for his two gun win and all of the other winners for their accomplishments! A final thank you is in order for the folks at Kelbly’s for running a “class act” match! 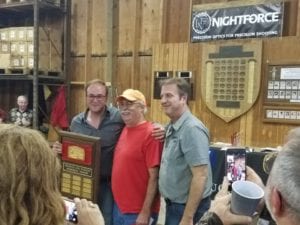 In closing, I am sure that some of you are asking “but Bob how well did you shoot?”. The answer is not as well as I would have liked, but I did not finish last either. I fired a 0.3534” two gun agg. and finished in 143rd place for my first ever Super Shoot. When Walt came up to me at the end of the match to ask how I had shot, I told him and he said that I did “okay” and “we need to do this again”. That made me feel better, and I am going to do my best to do better at my next Super Shoot. I will be looking forward to meeting old friends, as well as the new friends that I made there this year. I also had the privilege to help a couple of folks who needed some help, and hope that I will be able to meet more folks at the next Super Shoot I get to be part of.