Skip to content
We appreciate your patience and continued support! During this time of overwhelming demand, our team  is doing everything possible to produce more bullets and ammo than ever before.
Home/Press Releases/7mm 195gr EOL Elite Hunter Testing
Previous Next

We are excited to announce that the new Berger 7mm 195gr Match Grade Extreme Outer Limits (EOL) Elite Hunter is now in the public testing stage. This bullet was inspired by Bob Beck, host of EOL, and designed by Bryan Litz. Bob and EOL are building rifles that are capable of shooting extremely aggressive bullets, so Bryan and Berger Bullets have risen to the challenge of producing such a bullet. The 195gr EOL bullet has the highest ballistic performance of any 7mm bullet currently in existence, and is truly the first of its kind for a number of reasons.

The first thing to note about this bullet is that it breaks with the common trend-line for heavy bullets in a given caliber.  Typically, 180 grains is the heaviest weight available in 7mm.  This bullet adds 15 grains to that.

The actual form factor of the 7mm 195 grain Elite Hunter is among the lowest offered by any Berger Bullet, beating the G7 drag standard by 11%. Combined with the high sectional density, this bullet has a G7 BC of 0.387, which is 5% higher than the Berger .30 caliber 230 grain Target Hybrid!

This performance data is the result of live fire testing.

Stability requirements for this bullet are not as radical as you might think. In most conditions, a 1:8.3” twist is adequate for full stability. If you’re concerned about stability, a 1:8” twist would have you covered in any circumstance. Remember, slightly marginal stability can result in a couple percent reduction in BC, but the precision of the bullets will be unaffected until the stability factor (SG) drops below 1.1. Visit the Berger Bullets online stability calculator to further explore the stability requirements of this bullet in your expected environment: https://bergerbullets.com/twist-rate-calculator/. 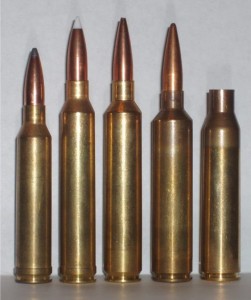 Some of the better known heavy hitters in the 7mm family. Left to Right: 7mm Remington Magnum, 7mm S.T.W., 7mm Remington Ultra Magnum, 7mm Allen Magnum and 338 Lapua Magnum case which is used as the parent case for the 7mm Allen Magnum. Originally designed to drive the 200 gr. ULD RBBT Wildcat Bullet to 3300 fps, the 7mm A.M. far exceeds the performance of all other 7mm magnums on the market today.

This is a hunting bullet with a thin jacket which provides reliable expansion on impact down to 1800 fps. With the long bearing surface and high pressure magnums that we anticipate this bullet being fired from, questions about the bullets survivability were a concern.

To address concerns about survivability, we sent some samples to Kirby Allen; a well-known wildcatter who specializes in high volume, high velocity magnums: http://www.apsrifles.com/Home_Page.html

Kirby was kind enough to run this bullet through its paces in some of his rifles. Long story short, the 7mm 195 grain Elite Hunter survived being fired at over 3300 fps! The bullets were accurate and impacted targets at long range with dope predicted by the measured BC.

Bob Beck (Extreme Outer Limits) has also been testing these bullets on game animals in the field. Bob reports:

“We have made 3 kills with the bullets, and they perform extremely well. The animals were llamas, which are normally hard to kill. We took three shots from 10 ft, 500 yards and 1046 yards. All of the bullets expanded and killed immediately. One of the shots was a frontal which flipped the animal over completely!”

We are excited about these bullets and confident that they will be successful. However, there are a couple of very important things to keep in mind. This bullet is currently being made ONLY in our Elite Hunter configuration.  It is made using our thinner jacket to produce the best possible terminal performance.  If these bullets are successful, then our plan is to also produce a Target version with a thicker jacket.  We know that many shooters are excited to try these bullets in target competitions. Our hunting bullets are held to the same tolerances as our target bullets, but do have a thinner jacket (read HERE for more information). They are not target bullets, which are built to withstand the speeds and pressures that our target shooters demand. So if you plan to use these in your target rifles, please test them thoroughly BEFORE you go to a major competition.

We will be very interested in hearing from those who received bullets from our first run.  The future of this bullet will depend on their results.