Skip to content
We appreciate your patience and continued support! During this time of overwhelming demand, our team  is doing everything possible to produce more bullets and ammo than ever before.
Home/Hunting, Press Releases/Introducing: The Berger 270 caliber 170 grain EOL Elite Hunter
Previous Next 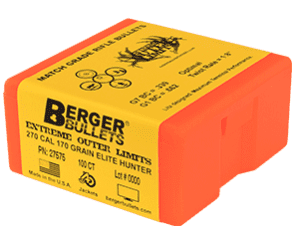 This bullet is designed for maximum external and terminal ballistic performance in 270 caliber rifles that  have twist rates faster than the traditional 1:10”.

Nearly all rifles chambered for 270 caliber are fitted with 1:10” twist barrels.  This relatively slow twist limits the length, weight and BC of bullets that can be stabilized.  Typically, the heaviest 270 bullets are around 150 grains because that is all that can be stabilized in a 1:10” twist. However, if a faster twist barrel is used for a 270 rifle, it can stabilize a much longer, heavier and higher BC bullet.

The newly designed 170 grain EOL Elite Hunter from Berger has a higher Sectional Density (SD) and Ballistic Coefficient (BC) than any other 270 hunting bullet in existence.

The Hybrid design blends the best aspects of the tangent and secant ogives.  It starts at the bearing surface with a tangent section that will align itself more effectively when the bullet contacts the rifling.  Beyond this section the shape transitions into a secant section which is proven to be to more effective in the wind. The result is a high BC bullet that is easy to tune.

The high BC allows the bullet to retain velocity better downrange which means less drop, less wind drift, and a higher velocity impact with the target.  The high SD gives the bullet enormous penetration potential on medium and big game animals.

These bullets are made with the longest possible Hybrid ogive.  The long nose produces the highest possible BC, but does not comply with the limitations of SAAMI and CIP COAL standards.  This bullet is deliberately intended for hunters who use custom rifles and either have extended length magazines or single feed their ammo. 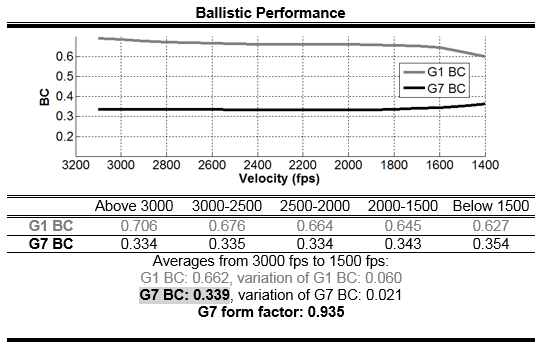 It’s very important to understand the stability requirements of this new bullet.  Most 270 rifles do not have a fast enough twist barrel.  For full stability, Berger recommends a 1:8” twist or faster.

The Extreme Outer Limits MOA line of rifles are made with faster-than-conventional twist rates to stabilize such long, high performance bullets.  The 270 caliber MOA rifle comes with a 1:8.5” twist which is plenty of twist to stabilize the new Berger 170 grain EOL Elite Hunter in all conditions. 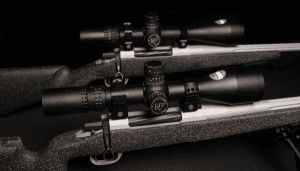 Extreme Outer Limits (EOL) MOA rifles are made with faster than standard twist rates to stabilize the highest performance bullets.

Although this new high BC, heavy-for-caliber bullet is great for long range, it’s also an excellent option for hunting at any range.  The high sectional density of heavy-for-caliber bullets promotes greater penetration than lighter, faster bullets.  If you’ve been considering the 270 for larger game and are concerned about the penetration potential of conventional options, this bullet is the answer.