Skip to content
We appreciate your patience and continued support! During this time of overwhelming demand, our team  is doing everything possible to produce more bullets and ammo than ever before.
Home/Press Releases/Introducing the New 6.5mm 130gr AR Hybrid OTM Tactical Bullet!
Previous Next

We are thrilled to announce that our recent tests were successful and our new 6.5mm 130gr AR Hybrid OTM Tactical bullet will soon be released to the public.

For the past few years the Berger Bullets team has had to put all new product projects on hold due to overwhelming demand for our existing product lines exceeding our production capacity. The 6.5mm 130gr Match AR Hybrid OTM Tactical bullet was one such project. Tooling was made for this new design just before the industry surge took place in late 2012.

Finally, thanks to new machinery coming online and the industry surge beginning to calm down, we are able to release designs that have been in the works for several years now. This is the first of many new designs that will be introduced in the coming years.

Our Chief Ballistician, Bryan Litz, has written the following article detailing the thought process behind the design of this brand new bullet.

6.5mm cartridges are the second most common cartridges used by top shooters in many of the Precision Rifle Series (PRS) matches, with 6mm being the most common. These kinds of tactical matches all have stages that require repeating rifles either AR-10 platforms or bolt guns, so magazine feeding is a must. Recognizing that Berger did not have an option that was truly optimized for this particular application, we went to work and the latest 6.5mm Hybrid is the result.

What makes this bullet optimal for magazine length ammo? To start with, the nose of the bullet is constrained in length so that when it’s loaded to mag length in 6.5mm cartridges such as the 6.5mm Creedmoor, 260 Remington and 6.5×47 Lapua, the nose of the bullet won’t be pushed below the case mouth. This can be an issue with some of the heavier 6.5mm bullets like the 140’s. Furthermore, the hybrid ogive design is not sensitive to jump distance like some other designs such as the VLD.

Another consideration of length constrained ammo is how much of the bullet is pushed down into the case. The inside of the case is for powder, and the more space you take up with bullet, the less powder you can fit in. Less powder means less total energy available, and muzzle velocity is depressed. A bullet weight of 130 grains is an optimal balance between external ballistic performance (BC) and internal case capacity considerations which translate into muzzle velocity. Further to this objective, the AR Hybrid has a minimal air gap in the front of the nose, which allows the bullet to have an even shorter OAL. When dealing with length constrained designs, you need to pack as much bullet into as little length as possible to optimize overall performance. Another advantage of making the bullet shorter is that stability, including transonic stability is improved.

Although this design is length constrained, the combination of a hybrid ogive and 7 degree Boat Tail produce a very respectable G7 form factor of 0.920 which is within 1% of the popular 6mm 105 grain Hybrid. See below for full live fire ballistic performance data. 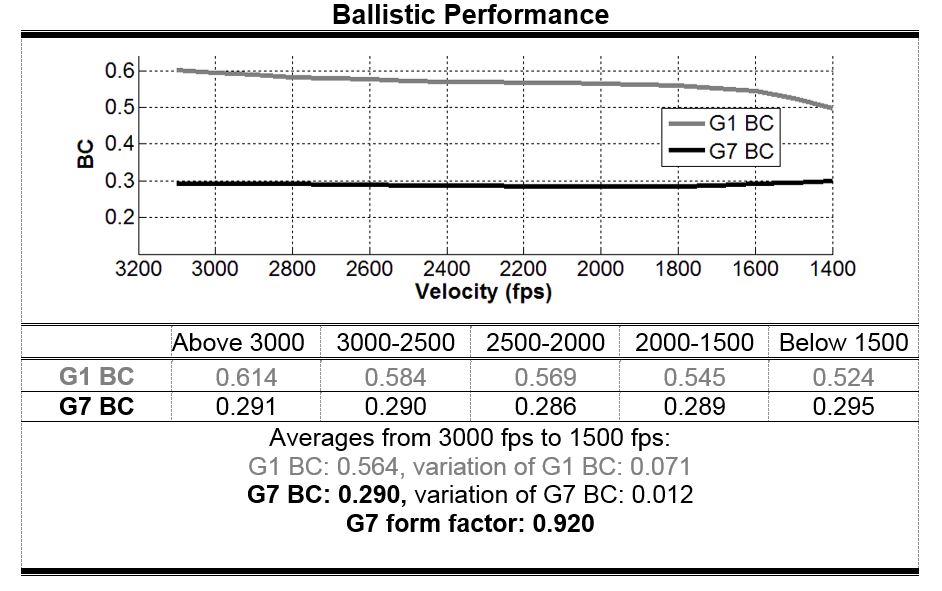 The 6.5mm 130 grain AR Hybrid will be barely stable from a 1:9” twist, and reaches full stability from a 1:8” twist which is common for many 6.5mm rifles. Visit the Berger Bullets twist rate calculator to get more detailed stability information on your specific barrel twist, muzzle velocity and environment.

The trend to smaller calibers in magazine fed rifles is happening for a very good reason. For a .308 Winchester round, you only have 2.37 calibers of nose length available for the bullet to protrude from the case. Such a short nose will have relatively high drag for the caliber. By contrast, smaller calibers such as 6.5mm and 6mm have proportionally more length available for the nose to protrude from the case and still fit in the same COAL constraint.

Proportionally longer noses mean lower drag. Proportionally longer bullets mean higher sectional density. Combine an elevated sectional density with lower drag, and you get higher BC bullets. For example, consider a 175 grain .30 caliber bullet commonly used in .308 Winchester; M118LR type ammo. These 175 grain bullets have G7 BC’s in the neighborhood of .243 to .260. Neck the .308 down to 6.5mm (260 Remington) or 6mm (.243 Winchester) and now look at the BC’s of the bullets available in these calibers which work within the same magazine length constraint. The 6.5mm 130 grain AR Hybrid has a G7 BC of 0.290, and the 6mm 105 grain Hybrid has a G7 BC of 0.278; both of which are higher than the .30 cal 175 grain bullet. Furthermore, you get hundreds of feet per second more velocity with the necked down cartridges as well.

All of the above translates into higher hit percentage. See the caliber comparison chart below* which is an excerpt taken from the book: Modern Advancements in Long Range Shooting which addresses this and many other topics in even more detail. 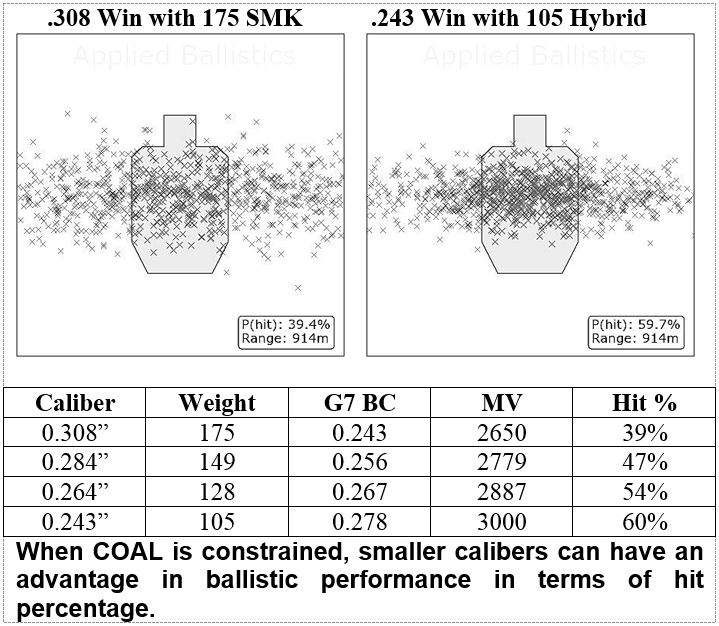 *The Weapon Employment Zone (WEZ) analysis shown above is for a 1000 yard shot on a standard IPSC silhouette in an uncertain environment having: +/- 2 mph wind, +/- 1 yard range, Muzzle Velocity SD of 10 fps, and a rifle shooting 1 MOA groups.

The new Berger 6.5mm 130 grain AR Hybrid OTM Tactical bullet is specifically optimized for use in loaded ammo with COAL constraints for magazine feeding. This bullet maximizes overall performance through BC as well as achievable muzzle velocity in mid-capacity 6.5mm cartridges fed from AR length magazines.

Keep an eye out for more announcements on when this bullet will be available for purchase.