Skip to content
We appreciate your patience and continued support! During this time of overwhelming demand, our team  is doing everything possible to produce more bullets and ammo than ever before.
Home/Events/Competitions/NRA Ireland 2014 Nationals
Previous Next

A few weeks ago, I traveled to Tullamore, Ireland for the NRAI 2014 Nationals. I’ve shot at the Midlands National Shooting Centre of Ireland several times now, and it has quickly become one of my favorite places to train. I believe the best way to improve your shooting skills is to challenge yourself, and the Midlands range is definitely a challenge. Some days, just hitting the paper at 1000 yards is an accomplishment, and a shot in the black is cause for celebration. Combine those challenging conditions with the beautiful scenery, tough competition and some of the most genuinely welcoming hosts one could ever hope to meet, and you can see why shooting at this range is such a delight. 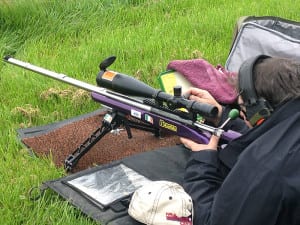 John O’Donoghue loading another shot in the F-TR match.

True to form, the match schedule was full, but still laid-back. The matches started at 10:00 am on Saturday, which suited my jet lagged self just fine. I had time for a nice strong cup of coffee and an Irish breakfast (fried egg with baked beans and sausage – yum!) before heading out to the range. First up was the F-Open, F-TR and TR (sling) matches. We shot a full Palma course – 15 shots at 800, 900 and 1000 yards. We pair-fired the match, which ensured that the competitors in each division all shot in the same conditions. It was a fairly calm day for the Midlands, but still tricky enough that we had to pay attention to the wind changes. It was easy to leak points. Kevin McKenna won the F-Open division with a 220-19v (out of a possible 225). Terry McQuaid won the F-TR with a 215-13v, and Stephen Hogan won the TR division.

When we finished at 1000 yards, the Match Rifle competitors headed to the 1200 yard line while the others went to the clubhouse for a tea break. Match Rifle is a scoped rifle match, typically shot back to 1200 yards. It is unique because competitors are allowed to use a jacket and sling, but can also have a rest under their hand. I didn’t have my jacket with me, but it was fun to shoot with a rest under my hand. We shot 15 shots at 1200 yds, and I ended up with the top score of 74-6x (out of a possible 75). 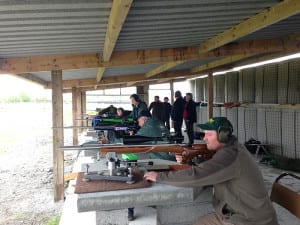 After a short break (and more tea), we went back to the 1000 yard line for the benchrest match. Each shooter was allowed 2 sighters, then shot two 5-shot groups. Jimmy Finn won the F-Open division, setting a new range record of 4 ¾” in the process. Richie Hayes won the F-TR division with a 7” group.

Sunday was the team match, with stages at 900 and 1000 yards. One of the F-Open teams was short a member, so I jumped in and shot with them. Two of us took turns coaching, which is always fun. Coaching is a great way to develop your wind reading skills. I had never shot with this group before, so it was a good chance to see different styles of team interactions. After the team match, we went back to 1200 yards for the “egg shoot,” which was exactly what it sounds like. I didn’t hit the egg that day, but I did get one later in the week.

The rest of my time in Ireland was just as busy, but also just as enjoyable. We shot sporting clays, historic 303s, and more F-Class. I was able to spend time working with new shooters and training with some of their national team coaches. They also took me around to some of the local sights when I wasn’t helping them work on their new clubhouse. 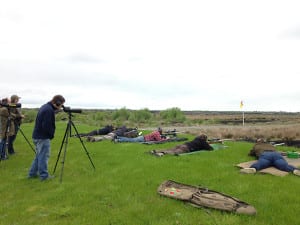 Shooters setting up at the 1200 yard line.

This was a great match, and I enjoyed every bit of it. We had a lot of events in a short period of time, but they made sure everyone had plenty of time and enjoyed themselves. Thank you to everyone who helped me put this trip together, from borrowing equipment to driving me around and making sure I didn’t get too lost. We have more plans for that range in the coming months, so keep an eye out on the F-Class Team Ireland Facebook page for more details and start thinking about a trip to Ireland. I can promise you’ll be glad you did!

The Midlands range is built on bog land, which makes for some very strong mirage! I’ve seen mirage even when there is frost on the ground. The brown in front of the firing line is called “peat” and is burned in place of firewood in Ireland. It is also springy and fun to jump on when dry, but floods pretty easily with even a little bit of rain.

Visit our Facebook page HERE for more pictures from the match!