Skip to content
We appreciate your patience and continued support! During this time of overwhelming demand, our team  is doing everything possible to produce more bullets and ammo than ever before.
Home/Events/Competitions/2012 National Long Range Championships – Day 2
Previous Next

The week is flying by. The High Power phase has ended, and we’re already halfway into the 2012 National Long Range Championships at Camp Perry. Congratulations to the winners of the High Power matches! Click HERE to see the full results. 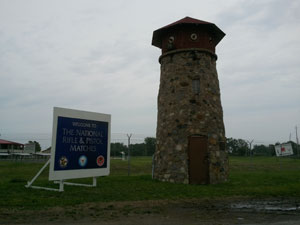 The towers leading into Camp Perry are a welcome sight for shooters every year.

Saturday, Aug 11, was the first day of the Long Range matches. This is a special Nationals for two reasons. First, the America’s Match is being shot here for the first time. The America’s Match is a team event that is held every two years, and alternates between the US and Canada. Because of that match, we are lucky to have teams competing from the UK, Canada, Australia and Japan. Also, this is the first year that the Matches are open to F-Class shooters. This year was a trial run, and the F-Class shooters have been eager to experience Camp Perry.

The first day consisted of two 20-shot matches at 1000 yards, with a final shoot-off for each division within each match. These matches are called the Mustin and the Band of Brothers, and are both fairly new additions to the Nationals. The day was cloudy, cool and windy. Each match has five divisions – Any Rifle, Palma Rifle, Service Rifle, F-Open and F-TR. The high scorer on each relay qualifies for the shoot-off at the end of the day, which consists of a ten shot string at 1000 yards against the other people in each division.

After the first two days, there is a five-way tie for match winner. John Whidden, Bryan Litz, Michelle Gallagher, John Friguglietti and Norm Anderson are all down just two points (out of a possible 600). There is one more 1000 yd match plus a palma course (15 shots at 800, 900 and 1000 yds each), so there is plenty of shooting left to go!

Congratulations to the winners so far! Follow the results on the NRA Website. Unfortunately, the F-Class results are not posted, but congratulations to David Bailey and Dan Pohlabel for winning Sunday’s F-Open and F-TR matches (respectively). Also, congratulations to Nancy Tompkins for her seventh Leech Cup win! I ended up pulling targets for the shoot-off yesterday, and did not get back to the line in time to hear the results of the shoot-offs. We will post that information as soon as possible. Also, read the Daily Bulletin and NRA Blog for up-to-date articles about the matches. More results to come!