Skip to content
We appreciate your patience and continued support! During this time of overwhelming demand, our team  is doing everything possible to produce more bullets and ammo than ever before.
Home/Events/Competitions/2012 National Matches – President’s & NTI results
Previous Next

It’s that time again! Rifle and pistol shooters from all over the US flock to Ohio every summer for the National Matches at Camp Perry (an Ohio National Guard base). These matches have been held since 1903 and run for almost six weeks each year. The highpower phase starts this week with the CMP Matches. This week is a blend of highpower “Across the Course” Service Rifle competition and education opportunities for new shooters. The Small Arms Firing school is open to competitors of all levels, and focuses on gun safety and training tips from expert shooters. 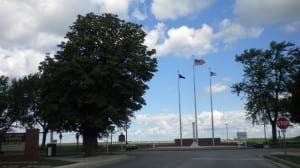 The main road leads from the front gates to the firing lines. It's an impressive sight, no matter how many times you see it. (click to enlarge)

The competition started on Monday with the President’s Match. The President’s Match is arguably one of the most prestigious rifle matches in the United States today, and a very common goal among Across the Course shooters is to qualify for the President’s 100. Hap Rocketto wrote an article about the history of this match, which can be read HERE. The President’s Match consists of 30 shots – 10 shots offhand at 200 yards, 10 shots rapid fire prone at 300 yards and 10 shots prone at 600 yards. The top 20 shooters then shoot a 10 shot shoot-off at 600 yards to determine the final winner. There are no sighting shots allowed for these matches, so shooters must show up with accurate sight settings if they hope to do well. SSG Ty Cooper of GA and Jared Perry of CA both shot perfect scores of 300 in the President’s, but Jared won the over-all match with a shoot-off score of 98-3x.

The firing line from Viale Range. (click to enlarge)

Tuesday was the National Trophy Individual Match, which is equally significant to military and civilian competitors alike. This is also the National Championship Leg Match, where shooters earn “leg points” for placing well. You must accumulate 30 leg points to become Distinguished, which is a second goal among most Across the Course shooters. Many shooters travel to Ohio solely for the President’s and NTI Matches, sometimes spending more time traveling than they actually do competing. This is a 50 shot match – 10 offhand at 200 yards, 10 sitting rapid fire at 200 yards, 10 prone rapid fire at 300 yards and 20 prone at 600 yards. Over 1,100 people competed in the NTI, and SGT Sherri Jo Gallagher from GA won the match with a 494-15x.

The CMP Matches will continue throughout the week, and will feature mainly team events. The Nationals continue next week with the NRA Highpower Nationals, and finally the NRA Long Range Nationals. Visit the CMP website HERE to view the results as they come in. You can also read more about the history of the matches and trophies HERE.