Skip to content
We appreciate your patience and continued support! During this time of overwhelming demand, our team  is doing everything possible to produce more bullets and ammo than ever before.
Home/Events/Competitions/2012 Southwest Long Range Nationals
Previous Next 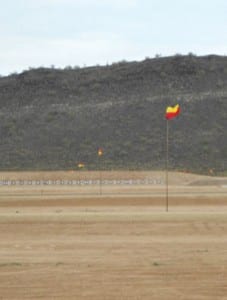 We definitely had wind for the wind class this year!

What could be better than enjoying a week in sunny Arizona in the middle of winter? Except maybe enjoying that sun, while shooting rifles and spending time with good friends. In early Feb, over 200 people came from all over North America to Ben Avery Shooting Facility for the third annual Southwest Long Range Nationals, sponsored by Berger Bullets.

The week kicked off on Tuesday with the long range wind clinic. Over 85 people showed up for the clinic, which almost doubled the class size from 2011. The morning started with equipment/position tips and techniques for the different disciplines (prone shooting by Nancy Tompkins, F-TR by Darrell Buell, and F-Open by Larry Bartholome). Then Mid Tompkins gave a short lesson on reading the wind, followed by several live fire drills. The wind cooperated with us this year, and gave the students something to work with! We brought in Subway 6’ sandwiches for lunch, and everyone enjoyed a picnic on the line. After lunch, Bryan taught a ballistics class and Mid finished off with a final drill on the firing line. 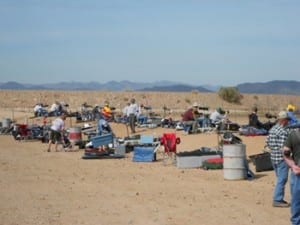 Competitors on the firing line at Ben Avery Shooting Facility

We realize that many people cannot take an entire week off of work to come shoot, so the Grand Aggregate runs from Friday through Sunday to include as many people as possible. Because of this, the 600 yd match on Wednesday is a stand-alone. We weren’t expecting a huge turn-out for a “fun” match, but we ended up with 145 people! It was a beautiful 70 degree day, with light but switching winds. Leo Ahearn (CO) won the sling division, David Bailey (TX) won the F-Open, and Chris Ozolins (NY) won the F-TR.

Thursday was the first team match, a 4-man team match shot at 800, 900, and 1000 yds (known as a “palma” match). We were thrilled to see 27 teams competing! Teams consist of 4 shooters, and have the option of either calling the wind changes for each other or having a dedicated wind coach. The day started out with very benign conditions, but the wind gradually picked up and became very difficult to keep up with the changes by the end of the day. 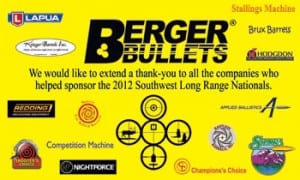 Thank you to all the sponsors who donated to the match!

Long Range shooters use wind flags to see changes in the wind, along with scopes to “read” the heat waves, or mirage, on the target. The shooters must use the flags and mirage to determine the direction and speed of the wind, and adjust their sights accordingly. The wind was not very strong during the week of the match, but the changes were quick. So the shooters had to pay very close attention and make the correct adjustments to keep their shots going into the center of the targets.

Saturday night was the barbeque dinner and awards ceremony for the team matches. We encourage other companies in the firearms industry to donate prizes to the match, and we gave away those prizes at the dinner also. We want to send as many people as possible home with something, and Berger provides cash awards, along with medals and over 25,000 bullets to the winners of the match. We also know that most of the top shooters already have top level equipment. So while this is a random prize drawing, we focus the first prizes towards newer shooters who are less likely to have the best equipment. We have to give a very big thank you to Nightforce, Sierra, Lapua, Krieger, Redding, and all the others who send donations for our shooters!

Sunday was the final day of shooting, with three 20-shot matches at 1000 yds, followed by an awards ceremony for the winners. We were so excited to have a such a great turn out this year, with 201 shooters from 32 states in the US and 4 provinces in Canada. In just three years, we have doubled in size, and hope to have even more people next year. So come out and bring a friend!

(For a complete listing of the results from this year (and previous matches), click here. To view more photos from the match, visit the photo album on our Facebook page!)