Skip to content
We appreciate your patience and continued support! During this time of overwhelming demand, our team  is doing everything possible to produce more bullets and ammo than ever before.
Home/Press Releases/NEW – Berger 6mm BR Column Bullet
Previous Next

There have been Bench Rest bullets in the past which were well-known for achieving consistently small groups over a wide tune range in many rifles and loads. One example of this was the Euber bullet. The seemingly ‘magical’ performance of these bullets has been attributed to special dies, stars aligning, owl feathers, or some other unknown influence. However, there are actually specific mass balance and aerodynamic properties which allow a bullet to mitigate dispersion and shoot precisely over a wide range of imperfect launch dynamics.

Understanding the physics behind dispersion mitigation, Bryan went to work creating a specific design for a bullet that had the widest and lowest tune valley. This means that the bullet shoots best in the widest variety of loads and seating depths. He came up with three different designs. Within each design, we made lead columns at three different heights in order to identify the truly optimal design. Over the next 4 years, Lou Murdica shot literally thousands of shots in the data capture phase of the project. When the smell of burnt powder cleared, there was one bullet left standing that was head and shoulders above the others in its ability to shoot well at the widest variety of loads and seating depths. 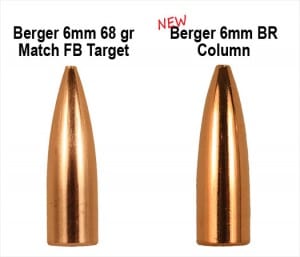 This bullet is the new Berger 6mm BR Column. You’ll notice that there is no listed weight. This is deliberate since the overall weight is not as important as the overall balance of the bullet, which is achieved with a specific internal lead column height. Due to slight variations in copper and lead material batches, one lot may weigh 64.8 gr while another lot might weigh 65.1 gr or 64.6 gr. So long as the column of lead is the correct height to achieve the desired balance, the overall weight is a by-product.

These bullets have already been used by Lou Murdica to win a Two Gun Agg in Florida. According to Walt’s Grandson and Plant Manager, David Hamilton, these bullets will be available by March 16th.