Skip to content
We appreciate your patience and continued support! During this time of overwhelming demand, our team  is doing everything possible to produce more bullets and ammo than ever before.
Home/Hunting/Long Range Hunting in Brady, Texas
Previous Next

Let’s get one thing out of the way right up front. There are several different ways one can go hunting. You can go out into the open spaces all over this great country of ours and seek out animals in a free range hunt. You can spot and stock or set up in a blind and wait.

Another option is to go to one of the numerous ranches who raise game for the purpose of being hunted (or shot if you regard the word hunting as meaning more than shooting game). Some would call this game shooting rather than game hunting, and I don’t disagree with the point. However, this type of hunting has very valuable benefits. One of those benefits is the guarantee of a target under the right conditions. It is this particular benefit that took me to the Diamond K Ranch in Brady, Texas.

I was invited to join Dave Arnberger of McMillan Rifles and Kyle Brown of Nightforce Optics on a hunt that would be filmed for the TV show Extreme Outer Limits, which is hosted by the husband and wife long range hunting team of Bob and Chris Beck. Under these circumstances, it was important that we found and took game, or the trip would have been a waste of time for several folks who don’t have time to waste. 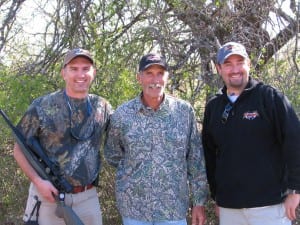 So let’s set the discussion of what is “hunting” aside and talk about how much fun we all had on this trip. I landed in Austin without any fuss. We were quickly connected with Bob and Kyle. Bob’s wife Chris did not make the trip. After a meet and greet, we piled in the rental van and made our way to Brady. Our first stop was Wal-Mart, where we met up with Dave (who drove from Phoenix so he could bring a cooler in which to take meat home) and Donald, who is the owner of the Diamond K Ranch. 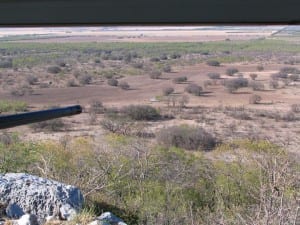 This is the view from the blind. The bolt was out of the rifle while we waited for the truck to get behind us. The furthest open space you can see is 1,000 yards plus from that blind.

At Wal-Mart, there was a line of guys waiting to buy their hunting licenses. This was my first exposure to how popular game hunting is in Texas. Brady is not a big enough town to have enough people to form a line, but the demand for hunting licenses is strong. $300 bucks later, we were heading down the road to the ranch.

The Diamond K Ranch is a unique hunting ranch in Texas because it has a ridge that runs along one side of the vast property. This ridge provides a vantage point over the ranch that gives a hunter the ability to take shots up to a mile. Most of the ranches in Texas are flat, so brush prevents long range shooting. Even if you get up in a blind, you still have limited access to long range shots. Donald’s ranch is a long range hunting oasis.

The cabin was clean and comfortable, with all the standard amenities. Pictures of previous hunters and their trophies are everywhere, along with several trophies that decorate the walls. Boy, does Donald know how to feed visiting hunters! The morning ritual was coffee, doughnuts and very well made breakfast burritos. On the first day, they smoked several different types of meats in a custom built smoker that was as big as a VW bug. It made for delicious lunches and dinners with several options for sides. My favorite side was called cheater beans. They were delicious, but you’ll have to go to Brady, Texas to find out why they are called cheater beans. 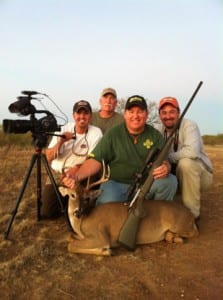 The hunting was done either early in the morning or during the hour or so before dusk. The rest of the day was spent telling stories, jokes, and taking the occasional nap. During the first day, we spent most of our time at Donald’s range. He has a bench set up with numerous targets from 200 yards to 1,000 yards. Donald has set up cameras, so you can clearly see where the shots hit the target at all distances. After making sure the McMillan hunting rifles were sighted in, we went to the blind.

We were on a management hunt, which meant we were taking game that Donald regarded as bad for the herd’s gene pool. This meant that the animals we were going after were smaller or had less-than-ideal antlers. The first hunt was for game between 500 and 700 yards. This resulted in two small bucks and a doe being taken out of breeding circulation.

Later, we would stretch the McMillan rifles’ legs and test the Nightforce scopes by looking for targets at 1,000 plus yards. Now to be clear, we were under conditions that were about as controlled as you can get on a hunt. We had plenty of time, so we could wait for light wind and perfectly broad side animals. We were shooting from a blind, which has shooting benches with benchrest front rests and rear sand bags. Donald is an avid long range shooter, so he knows how to set up his blinds for the best possible long range shooting scenario.

When the shooting was done, Dave had taken a doe at 1,010 yards. Kyle got his doe at 1,066 yds with a pinwheel shot in the bread basket. Since I shot a doe at the shorter distance, it was my turn to shoot a buck. I managed to put mine down at 1,071 yards. My longest shot on game so far. I’ve done plenty of shooting at 1,000 yards targets, and in many ways the shot was similar but there is something about shooting at game that ups the intensity. It was a blast.

When the trip was over, we had taken 6 management deer out of Donald’s herd and had a truly wonderful time doing it. Getting a chance to “hang out” with these guys was a big part of the fun for me. If you enjoy long range hunting or shooting and you want to go to a place where you have a 100% chance to take the right long range shot, I encourage you to look the Diamond K Ranch up on the internet. I can say from personal experience that Donald will take good care of you.