Skip to content
We appreciate your patience and continued support! During this time of overwhelming demand, our team  is doing everything possible to produce more bullets and ammo than ever before.
Home/New Products, Press Releases/NEW – 7mm 184gr F-Open Hybrid Target Bullet
Previous Next

Official 7mm bullet of the US F-Open Rifle Team 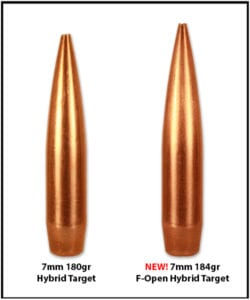 F-Class is one of the fastest growing precision rifle shooting disciplines, requiring the very best precision and accuracy to compete at the top levels. Rifles and other equipment have continued to advance as the sport becomes ever more competitive, and Berger has always been dedicated to making the very best bullets for our shooters. To that end, we, along with the US F-Open Rifle Team, are excited to announce the release of the new Berger 7mm 184gr F-Open Hybrid Target bullet.

Our renowned ballistician, Bryan Litz, designed the new 184gr F-Open Hybrid to be slightly heavier, slightly longer and have a more aggressive ogive shape; giving it a ballistic advantage to our existing 7mm 180gr Hybrid and VLD Target bullet designs. This bullet complements the 30 cal 200.20x Hybrid Target bullet that was released last year in collaboration with the US F-TR Rifle Team. Just like our 200.20x bullet, we took an existing design and optimized the ballistic profile to make it even better. 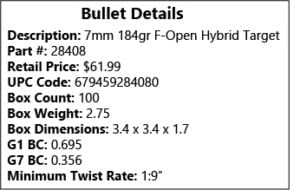 The US F-Open Rifle Team tested these bullets thoroughly to make sure that they performed as well on target as they did in theory. The results are in, and we are all pleased to say that this bullet will be the official 7mm bullet of choice for the US F-Open team. “The United States Rifle Team 2021 F-Open is extremely excited about the release of the new Berger 184gr F-Open Hybrid. Many members have tested the prototype bullets with outstanding success,” says Dan Bramley, Team Captain.

To support the team, Berger Bullets will donate $1.00 for every box of 7mm 184gr F-Open Hybrid bullets sold towards U.S. Team expenses for the upcoming 2021 F-Class World Championships in South Africa.