Skip to content
We appreciate your patience and continued support! During this time of overwhelming demand, our team  is doing everything possible to produce more bullets and ammo than ever before.
Home/Hunting/Brush Country Monsters TV Show Hunt at the Novillos Ranch
Previous Next

One of the challenges Berger faces with our hunting bullets is that some hunters regard them as being good for only long range hunting. We know this isn’t true, but it is difficult to help hunters understand why. For this reason, we made the decision to sponsor a TV show called Brush Country Monsters hosted by Lamar Smith. 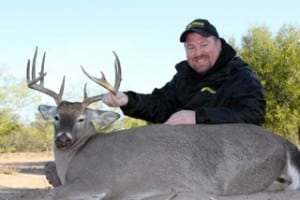 Eric with his second deer.

Brush Country Monsters is based out of the Novillos Ranch in South Texas. The Novillos Ranch is a free range whitetail hunting operation that uses methods that are necessary in conditions where the brush is so thick you can’t see more than 20 feet. They’ve set up shooting houses among wagon wheel shaped senderos. A “sendero” is a Texas-coined phrase which basically means “wildlife opening”.

The dense brush is cleared away in specific locations, allowing the hunters to observe the wildlife in every direction. Given the density of the brush, these senderos provide shot opportunities that typically won’t go past 200 yards. Since the vast majority of animals taken at the Novillos ranch are at short range, it is the perfect opportunity for us to partner with Brush Country Monsters TV show to prove how well our bullets work. 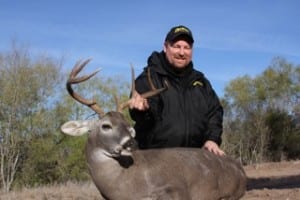 Eric with the first deer he took.

On December 6th of last year, I had the pleasure of flying into McAllen International airport where I was met by Lamar Smith, otherwise known as “Super Guide” or “Super” for short. The nickname fits well as Lamar is as knowledgeable about hunting whitetails in Texas as anyone I’ve met.

After a quick bite to eat, we were off to the lodge. The accommodations are superb. It was just the right combination of modern comfort and hunter styled accessories. They’ve got a mount on the wall which features two very large whitetail bucks locked together by their horns. I thought this was a creative way to mount two large animals; but as it turns out, these trophy sized game were found locked together. Not the end a hunter would like for them, but it makes an interesting looking mount.

Day one started with Lamar and I going out to one of the shooting houses before dawn broke. Corn is used to draw the animals into the senderos. After everything was situated, we waited while several animals came into view. I hunted whitetails only once before in the center of Texas, so I was impressed by the larger southern Texas animals. Lamar has been doing this for years, so he suggested I hold off since the animals we were looking at were not as big as we wanted.

Sometime later I saw a buck come into view that looked great. We watched it for a while and Lamar said that if I wanted that one, then I should take the shot. Eager to shoot our hunting bullets at short range, I got into position and sent a shot toward the whitetail. It slammed right into the vitals. The deer managed to run about 30 feet before it hit the ground dead. The bullet worked perfectly. 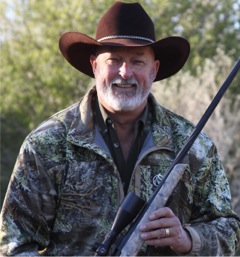 Having three days left to hunt allowed me a chance to go after an even larger animal. On the evening of the second day, I had another chance at an even larger buck. This animal was closer to us than the first whitetail I shot. I got into position and let the hammer fall. The bullet hit the deer just behind the shoulder in the vitals, and this deer dropped where it was hit. This was my second whitetail hunt, and each animal I took was bigger than the last.

With another day left, we decided to head to another property which is known to be a favorite stomping ground of the local wild hog population. I thoroughly enjoy hunting hogs; but on this trip, we weren’t able to flush any out of the dense brush. I spent several hours watching many Texas animals and talking about hunting and other things with Lamar.

If you are interested in going after some great-sized free range southern Texas deer, I encourage you to get in touch with the guys at the Novillos Ranch. The facilities are first class, the guides are knowledgeable and great fun to hang around and the memories will be with me forever.