Skip to content
We appreciate your patience and continued support! During this time of overwhelming demand, our team  is doing everything possible to produce more bullets and ammo than ever before.
Home/Events/Competitions/Remington-Bushmaster 2012 Long Range Regional
Previous Next 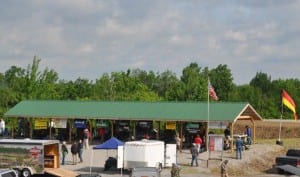 The Remington-Bushmaster 2012 Long Range Regional Championship was held at Reade Range in Fallen Timbers, Pennsylvania on June 1, 2, and 3. We had a great turn out of over 60 shooters. Half of these shooters showed up on Friday to participate in the practice and team match. The weather had other plans for the shooters though, and the second half of the team match was rained out.

Saturday started off sunny, but cool and windy, with 62 shooters registering in Sling(43), F-TR(7) and F-Open(12). Pit service was provided by the Boy Scout Troops of the area, and had a bit of a rocky start. With the help of some shooter volunteers, the pits smoothed out throughout the day and the first three 1000 yd. matches ran without incident. The wind pretty much held a steady 2 MOA left throughout the day, and some high scores were fired

After the matches were finish and daily scores posted, Bryan Litz conducted a wind clinic for all those in attendance. Soon after, the Reade Range Staff provided a wonderful meal of ca-bobs, salads, fresh fruit and beverages. As everyone finished up their meals, it was time for the prize raffle. Over 50 prizes, including a Vortex Spotting Scope, gift certificates, and many other merchandise items worth over $6000 were raffled off. This concluded the first day of shooting with the standing as listed below. Mark Scheafer, master class, was only 1-X away from tying Jon for 3rd place. 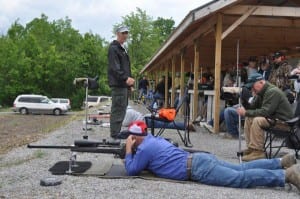 Sunday morning started off overcast and the same wind as the day before. Conditions remained constant and the pits ran smoother than ever with more volunteers helping the scout troops. Rain was forecasted to start at 3:00 PM so the shooters were eager to move through the matches and beat the rain. Mission accomplished as a cease fire was call just before 3:00 ending the last match. Scores were quickly figured and awards were promptly given. Bryan Litz, of Applied Ballistics LLC, announced the winners of each individual match (see scores), Tom Ferraro announce the aggregate match winners who received NRA medals and monetary awards, and finally Ken Roxburgh presented the winners with guns on behalf of Remington-Bushmaster. (see below) The rain showed up as the final name was announced and it was time for everyone to head home.

We would like to thank everyone who participated in this match and all of those who helped make it a great weekend. We are looking forward to seeing everyone again next year, along with their friends. Let’s keep building this into an awesome match!

Thanks to all the companies who helped sponsor the match! 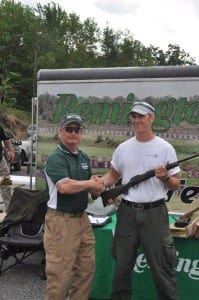 Remington presented several rifles as awards to the winners.