Skip to content
We appreciate your patience and continued support! During this time of overwhelming demand, our team  is doing everything possible to produce more bullets and ammo than ever before.
Home/Events/Competitions, Press Releases/Walt Berger Named Team USA Rifle Captain for World Benchrest Championships
Previous Next

Walt Berger, founder of Berger Bullets and Ammunition, was named Captain of the USA Rifle Team for the World Benchrest Championships in Calgary, Canada this past 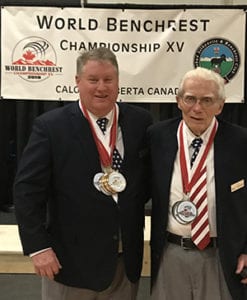 week. The World Championships are held every two years and attract competitors from over 30 countries, testing their skills at 100-yard and 200-yard distances.

Along with being named Team Captain, Walt participated in the World Benchrest Championships and did not disappoint. He finished 6th place in the Light Varmint 200-yard individual matches, and went on to support “USA Team A” to win the Silver Medal!

Under Walt’s leadership, the USA’s Joel Nader won the Gold Medal for individuals, “USA Team C” won the Gold and “USA Team A” took the Silver. Congratulations to Walt and Team USA for a dominating performance.

At 90 years young, Walt continues to work for Berger as lead technical consultant and regularly competes in AZBRS Matches each month at Ben Avery Shooting Complex in Phoenix, AZ.