Skip to content
We appreciate your patience and continued support! During this time of overwhelming demand, our team  is doing everything possible to produce more bullets and ammo than ever before.
Home/No BS BC/Variation in BC with Velocity

Variation in BC with Velocity

Variation in BC with Velocity

“Some bullet manufacturers choose to only advertise the BCs achieved at high speeds for marketing purposes. We don’t, because that’s BS.”

Any bullet can have both a G1 and a G7 BC, it’s just a matter which one is more representative for all speeds.  For example, a modern bullet that’s shaped more like the G7 standard will have a G7 BC that stays very constant as it flies from muzzle velocity of 3000 fps down to 1500 fps at long range.  However, that same bullet will have a G1 BC that can change by 20% or more as it flies.  This migration of BC makes it very difficult to predict the flight performance (drop and wind deflection) of the bullet at long range.  The migrating BC also makes it hard to compare performance of different bullets. 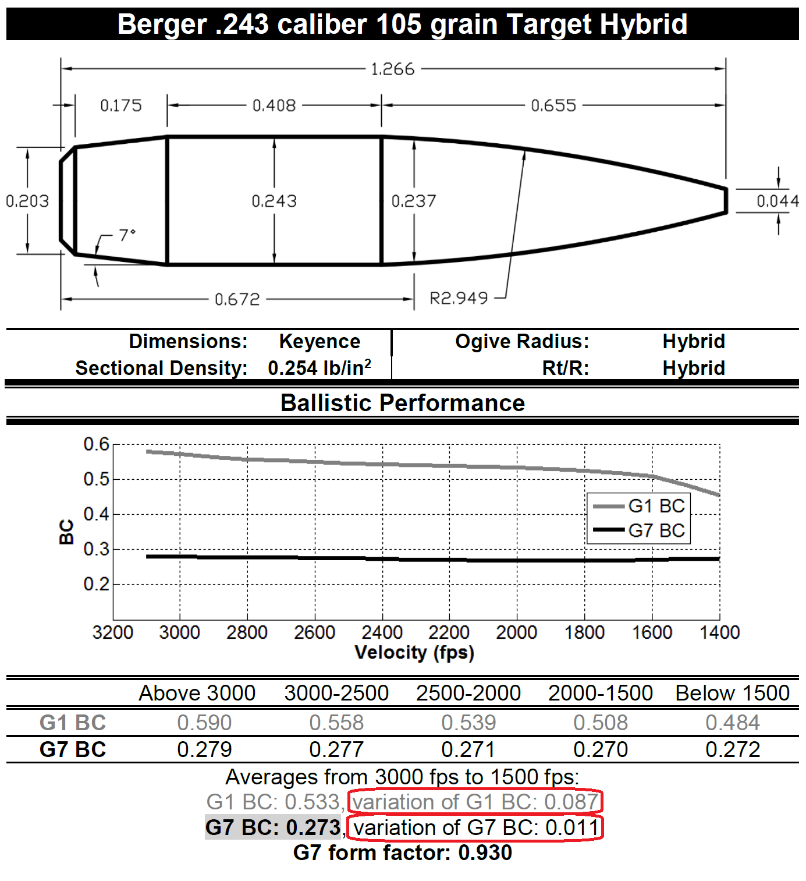 Figure 1. Variation in the G1 BC is 8 times the variation of the G7 BC.

Check out Table 1 below to see what that means in terms of trajectory prediction error. Using any of the valid G1 BC’s for this bullet, you can calculate anywhere from -296” to -266” of drop at 1000 yards. That’s a window of 30” (very bad accuracy)! However, since this bullet is a better match to the G7 standard model, there is less variation in its G7 referenced BC, and the result is much less error in predicted drop. Going from the highest to the lowest G7 BC values for this bullet, the prediction window is only 6” at 1000 yards, which is 1/5 the error that’s possible with the G1 model. 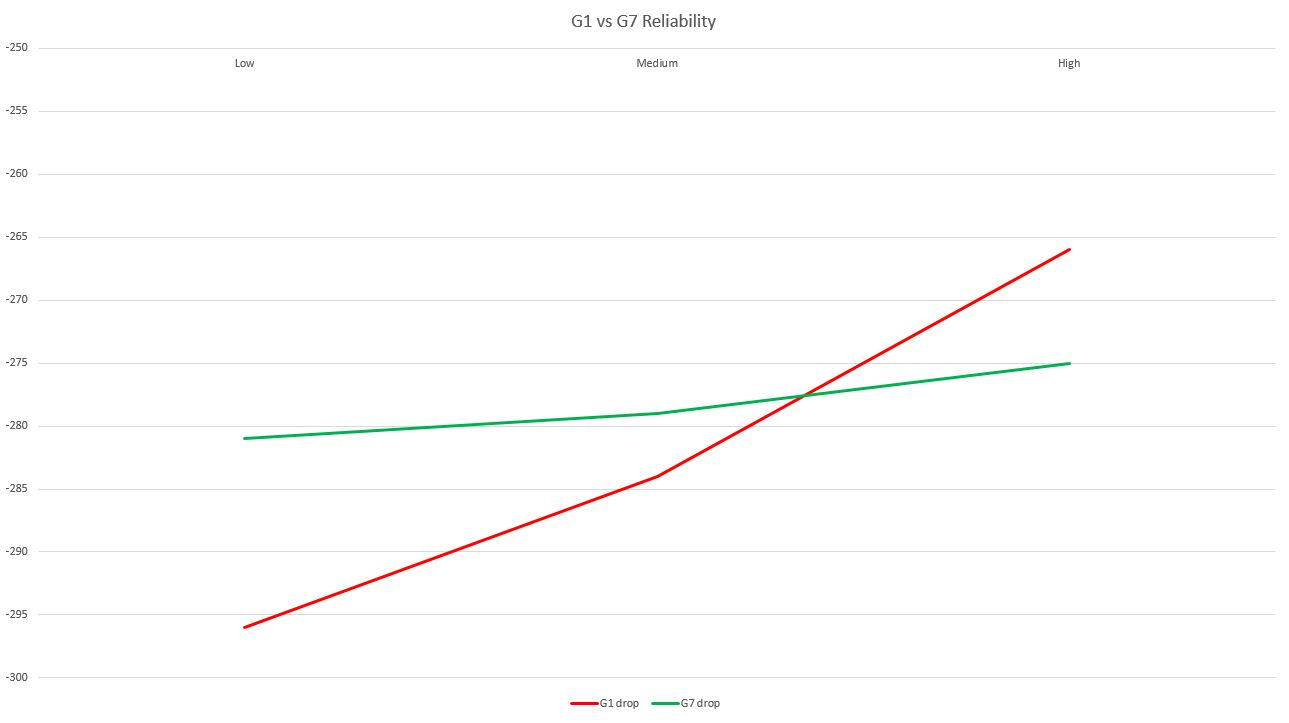 Selection of the proper model (G7 for modern long range bullets) is important to accurate trajectory prediction as demonstrated in the above example. It’s also important to make informed decisions based on manufacturer published information.

Consider a manufacturer who wants to sell a lot of bullets, and knows that high BC sells. They could advertise the G1 BC of 0.590 for the 6mm 105 gr Hybrid bullet in the previous example. This number isn’t technically wrong, but it’s only valid at 3000 fps. As soon as the bullet starts to lose velocity, the BC goes down and all bets are off. Because G1 BC’s vary/migrate much more with velocity, they are easy to manipulate and mislead buyers with. G7 referenced BC’s are more consistent for all speeds, are more useful for predicting accurate trajectories, AND are harder to inflate for marketing purposes. 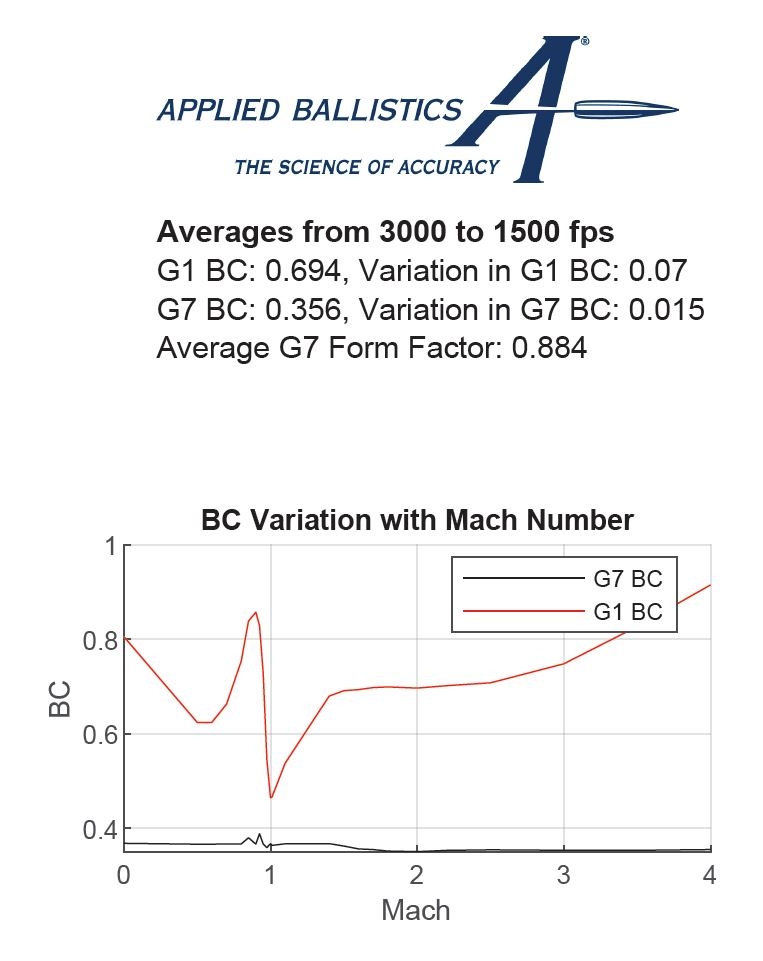 Figure 2. Doppler radar results of the 6.5mm 153.5 LRHT bullet from it’s R&D phase. Note how big of a difference there is between G1 and G7 BC Variations!

Berger Bullets takes BC’s very seriously. We don’t believe in inflating BC’s for marketing like some other manufacturers. It’s much more important that customers can accurately compare performance, select a bullet based on the truth of its performance, and then predict accurate trajectories so they can hit targets. Because of this commitment to the shooter, Berger Bullets uses live fire, doppler radar test data fired at long range to measure BC. Furthermore, we advertise the average BC from 3000 fps to 1500 fps. This is not the highest possible number we could use, but it is the most accurate number for comparing and predicting bullet performance.